A dynamic father-son piano duo that blends classic and contemporary music into an enthralling concert experience.
Enjoy some of the world’s best piano music in Ryan & Ryan’s Kickin’ the Clouds Away program. Including jazz, ragtime, classical, and even gospel song arrangements by members of the duo, this concert is sure to strike a chord with any audience.
A native of Trinidad & Tobago, Donald came to the United States to study music, earning degrees from Oral Roberts University and the University of Tulsa. He is well known as a master of diverse styles—evidenced by a diploma from the 9th International Chopin Competition as well as his induction into the Oklahoma Jazz Hall of Fame. Donald has also earned the distinction of being among the most accomplished pianists in the world as a Steinway Artist.
Given his father’s profession, Barron’s choice of playing the piano is no surprise, and he has been no stranger to the stage since the age of four. He distinguished himself in piano studies at the University of Oklahoma and has been a featured soloist at the Oklahoma Jazz Hall of Fame and the Tulsa Performing Arts Center, among many other venues. Barron has also been a prizewinner in numerous piano competitions, including the Oklahoma Israel Exchange Young Artists Competition in 2011.
Tickets: $20-$35, Students $12 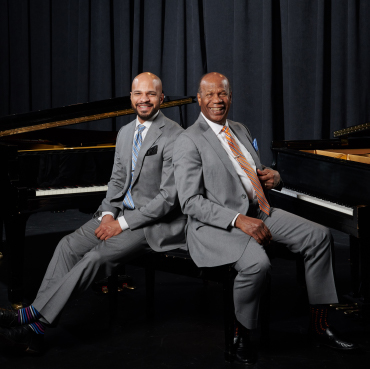