Broadway veteran Ray Wills captures the spirit and spunk of Harry S. Truman in this one-man, autobiographical play about the life of the former US President. As described by the Wichita Eagle’s Bob Curtright, “Truman was famous for his plain-spoken zingers, and Wills makes them sharper and funnier by tossing them off as a matter-of-fact conversation rather than showcasing them like a stand-up. His sophisticated and accomplished portrayal is both highly entertaining and cleverly instructive.” Ray has made a career as an actor for 30 years in New York City and Los Angeles and is a proud member of Actor’s Equity Association and SAG-AFTRA. On Broadway, he was in the original casts of The Producers, Wonderful Town, Big, and Anna Karenina, and performed with the New York Philharmonic at Lincoln Center in Candide. In addition, he holds numerous Off-Broadway and television credits. 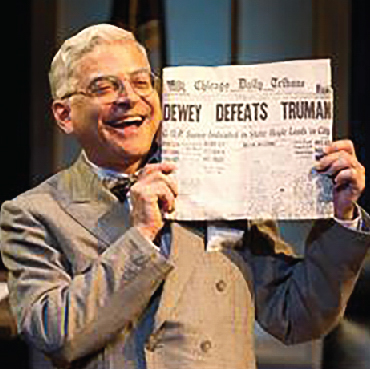