A legendary incident of World War I occurred on Christmas Eve in 1914, when gunfire suddenly went quiet along stretches of the Western Front as British and German troops spontaneously observed an informal holiday truce during which time they climbed out of their trenches and met each other halfway across No Man’s Land. “All Is Calm” is a touching musical tribute to that brief time when peace on Earth reigned over desolate battlefields. Bogged down in opposing trenches within earshot of each other, both the British and German forces struggle to observe Christmas. They hear their enemies singing holiday carols and then, as “Silent Night” is rendered sweetly first in German then English, the soldiers slowly approach one another across the wasteland. A rowdy celebration erupts as the men joyfully exchange food and impromptu gifts, try on each other’s helmets, swap personal stories, and even plunge into a wild game of soccer. The singing is performed entirely a cappella to musical arrangements by that provide rich and sonorous renditions of familiar holiday anthems such as “Angels We Have Heard on High” and “O Tannenbaum” along with Great War icons like “Keep the Home Fires Burning.” As the troops crawl back into their trenches, their mutual crooning of “Auld Lang Syne” sounds especially poignant. Sorrowful though its true story may be, All Is Calm is an inspiring musical event for the holiday season. 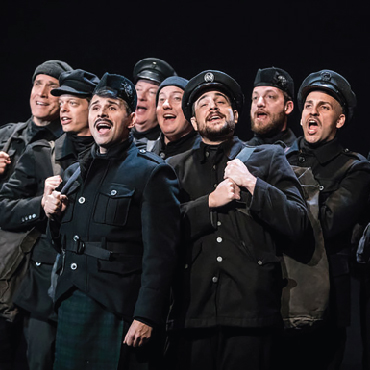